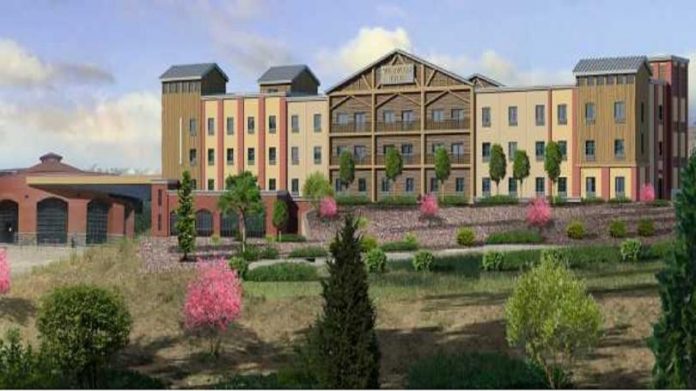 The hotel expansion drums are still beating away in Cripple Creek, even if physical progress isn’t proceeding as rapidly as some business leaders may want.

Last week, the Cripple Creek City Council, with virtually no debate, signaled the green light for the Wildwood casino and its plans for a key property rezoning bid and in vacating a 60-foot city street right-of-way for a road, located adjacent to their new hotel

Joe Canfora, a key owner of the Wildwood, and a representative of Merit WPU, LLC, presented the requests as common sense and safety measures to establish safer access to their new hotel, currently under construction. He also touted Wildwood’s plans to offer more non-gaming amenities, such as housing and retail.

The Wildwood had recently purchased a 12-lot area at the property, located adjacent to the hotel, which formerly belonged to Susan Ward. With this purchase, the Merit group wanted the property designation changed from residential to that of a business buffer, neighborhood mixed-use.

Canfora threw out a variety of ideas for the Wildwood’s non-gaming pursuits but admitted they haven’t devised specific plans yet. “We have a lot on our plate,” said the Wildwood owner. Some of these future plans, according to documents and preliminary statements, could involve having administrative offices at the new property site, developing retail and converting their current hotel, the Gold King Mountain Inn, into an employee housing hub.

But at least for now, Canfora stressed that their requests were aimed at facilitating the new hotel project construction. Last summer, the Wildwood emerged as the victor in the competitive race for the first Cripple Creek casino to break ground with a new hotel expansion. The $14 million Wildwood hotel should be completed in late 2020.

The council had no problem with the rezoning request, with Councilman Tom Litherland even questioning how this land was zoned residential to begin with. He cited the fact that this area once housed a drive-through hamburger outlet. It also featured a welding shop.

No one spoke against the rezoning request.

As part of their proposed changes, the Wildwood also wants to have a main portion of Pikes Peak Avenue, located between the casino and the new hotel, vacated and reconfigured to provide better access into their hotel and to have a better pedestrian flow. Currently, this part of town has posed challenges for pedestrians crossing Hwy. 67, especially from the convenience store and gas station owned by Wildwood, located directly across the highway from the casino.  “It gives us more flexibility in how things are designed,” said Canfora.

With this plan, proponents indicated there would be a better connection between the casino and the new hotel, and their development area would have a better overall plan.

Canfora, as he has in the past, cited their desire to generate more tourism in the area in asking support for their plans.

But in addressing the council at last week’s hearing, he mainly cited safety concerns and stated that their casino group is trying to resolve problem issues. Under the new plan, he said the casino, for example, could establish better accessible handicap parking.

Bill Gray, the city’s community development director, supported the request, as long as the Wildwood adhered to a few conditions. Public Works Director Steve DiCamillo also endorsed the request, but conceded that this part of town does pose some challenges. “Overall, it’s a good idea,” said DiCamillo.

The only public comment came from former business owner John Freeman, who cited this request as a good plan.

The only slight roadblock mentioned involved possible objections from the Colorado Department of Transportation. But Gray didn’t see this as a problem.

With these approvals, the stage is set for the Wildwood to continue full-speed ahead with their new $14 million hotel project, which broke ground last summer.

Currently, the town has experienced a slew of casino/hotel expansion bids. But to date, the only project definitely moving forward is the Wildwood’s venture. The other big local casino hotel expansions have been proposed by Bronco Billy’s and Triple Crown. Another possible expansion could come forth by Century casino.

Gray believes some of these other lodging developments will get started in 2020. He cited a potential delay dealing with the current commercial construction boom in Colorado Springs, which may put a damper on the availability of contractors for Cripple Creek hotel projects.