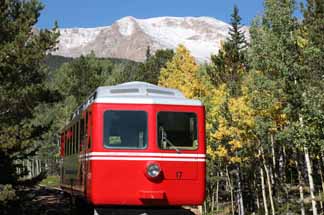 The Downtown Development Authority (DDA) firmed up plans to transport and place the cog railroad car they acquired behind the Woodland Station Depot around November 20,.

The car is part of the Pikes Peak Cog Railway, which took passengers up and down America’s famous mountain for 125-plus years. The popular tourist attraction has now been shut down for repairs, allowing interested parties to acquire the vintage rail vehicles.

This decision was made at the DDA’s regular monthly meeting last Tuesday. The date may change depending on the weather.

The crane company has visited the site and has no problem with the location. According to DDA President Merry Jo Larsen, “We have all the support in the world from the cog railroad people.”

The DDA has been doing a lot of behind the scenes research into bringing the car to the city. Among new details they discovered is that the soil where the car will sit needs to be compacted to support the weight of the car and track. To solve this possible hurdle, RAM Construction submitted a bid to compact the soil for $577, which they will waive and donate to the project.

With site prep, transportation, and all that goes into it, the original estimated cost of acquiring one car was between $12,000 – $15,000. With some negotiations and research, the board managed to lower that estimate to $10,800.

Woodland Park Councilman Paul Saunier was at the meeting and stated, “I think it’s wonderful to see so many people come together on this project. I’m so pleased. I can’t say enough about the cooperation with the city and the DDA coming together to make this happen.” City staff will help in placing the track and railroad ties that the car will sit on.

Larsen hopes the citizens will turn out to witness the car coming up the pass and watching the car being placed. The DDA will be providing hot dogs and hot chocolate to celebrate the event. She also lauded the help of all the volunteers who are giving their time and energy to install the car and hopes to have the Woodland Park High school band present at the event.

The acquisition of the car was not without opposition, but those opposed were in the minority. Those opposed believe the cost of transporting the car to the city and setting it up is too expensive. Plus, they have expressed concerns over using $15,000 of the organizations estimated reserve of $30,000 for the project. City Council Liaison to the DDA, Kellie Case, said, “I think it’s better to have that money in the bank.”

Veteran DDA  board member Al Born stuck to his guns, insisting that the car is not in line with the western theme of Woodland Park. Born suggested a better idea would be to seek out an old steam engine that is more appropriate to the city’s railroad history. Several members who have looked into that options said steam engines are difficult to find and when found are extremely expensive.

Eventually, the public will be allowed to have access inside of the car. Larsen said, “Probably not right away. We have to work out who is going to take care of the thing and who’s going to be managing it.”

When the discussion on the car was finished, the board moved on to the arena of financial issues. The board discussed mil levy rates, business license fees, and sales tax vendor fees. Larsen said, “The reason this is on our agenda is because it’s on the council’s agenda.”

The subject of the two developers interested in doing major projects at Woodland Station is still being kept under wraps. The board only discusses this issue in executive sessions, which are closed to the public.

However, the board did say last week that negotiations with the developers are making progress.