Brian Churchill, the new chief of police in Manitou Springs since Oct. 1, is settling into his new position and in his new community.

“I love Manitou,” Churchill said., in a recent interview with TMJ News. “The people is what makes it special.” Churchill and his wife visited the area in 2013 and saw the Air Force Academy, Pikes Peak and the Cog Railroad, fell in love with Manitou Springs and were hooked on coming here.

And so, he packed his stuff and came here, leaving his wife and children in Indianapolis until their house got sold and he found a place for all of them to live. “We aren’t beach people,” he said. “If you don’t want the beach, you want the mountains. I have a jeep that was built to go up the mountains. There is no better place than here. The town is welcoming and the people are friendly.”

Working for the police department in Indianapolis, officers are locked in for 25 years before pensions or benefits kick in and, after 26 years, the time had come for a change, Churchill said. “The great thing about Manitou is the quality of life,” he said. “I mean, what can be better than free 30-minute parking? You can park, go to the coffee shop and the store and park for free. What can be better than that? I was immediately hooked.”

Since taking over the reins of law enforcement in Manitou, he has faced protesters from a Kansas church group, met with county officials and  local leaders and formed a bond with officers from El Paso County Sheriff’s Office, Colorado Springs Police and officials up Ute Pass. According to the police chief, Teller County, El Paso County and all the towns are interconnected.

He has also focused on updating the city’s Emergency Operation Plan and has spent time educating visitors about the area. “I don’t plan on making too many changes,” he said, “we have good quality officers here. I do want to work closely with neighborhood associations and the Chamber of Commerce. I want to develop more community involvement and work with marketing to make the department friendly and engaging.” 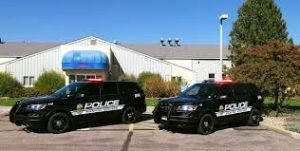 He said the goals for the department are similar to what he pursued with the Indianapolis police force: reduce crime; reduce the fear of crime; and enhance the quality of life. Churchill contends this overall effort will help citizens regain their dignity and connect them with the department. He has developed what he called “Operation New Normal,” which produced videos for YouTube.

“One goal is to educate the community about behavioral health issues and help understand the roots of crime,” Churchill said. “We need to get outside the law enforcement box and partner with the community. We need to enhance the quality of life and see what makes the community tick. That is my goal. The engagement has been good and positive.”

Churchill joined the Indianapolis Police Department in 1995, after serving for two years as a patrol officer in Noblesville, Indiana. He began his career in Indianapolis as a patrol officer in the North District and has been in supervision since 2005. While in Indianapolis, he served in a variety of assignments, including the Operations Division, Professional Standards Division, Special Services Division (Canine Unit), Neighborhood Resource Officer Unit, as an instructor for the Indianapolis Metropolitan Police Department Training Academy (In-Service), the FOP Liaison to the Citizens Police Complaint Board, and as an investigator for the Internal Affairs Unit.

Churchill served as executive officer and crime strategist for the Indianapolis Police Department East District from 2013 to March 2015, when he was tasked to create a new branch within the department, the Community Engagement Office. While in that position, he developed and implemented a social service approach to policing. This branch addressed the root causes of crime and focused on  innovative strategies related to issues of mental health, substance abuse, poverty and homelessness, youth and immigrant services and quality of life concerns are referred to community partners. Churchill believes this unique approach improves the likelihood that people will have access to a path toward self-sustainability.

The Manitou police chief is a 2002 graduate of Oakland City University (Indiana) with a degree in Management of Human Resources, Churchill holds a graduate certificate from the University of Virginia. He is a graduate of the 260th session of the FBI National Academy in Quantico, Virginia and the Indianapolis Metropolitan Police Department Leadership Academy session 2010-01. He is a member of the FBI National Academy Associates and serves on the board of the FBINAA Committee on Community Engagement. Churchill is a retiree member of FOP Lodge 86 and VFW Post 5864. He served in the U.S. Army as an infantryman in the 1st Ranger Battalion and is a graduate of the U.S. Army Ranger School and Airborne School. He and his wife Carol have four children.