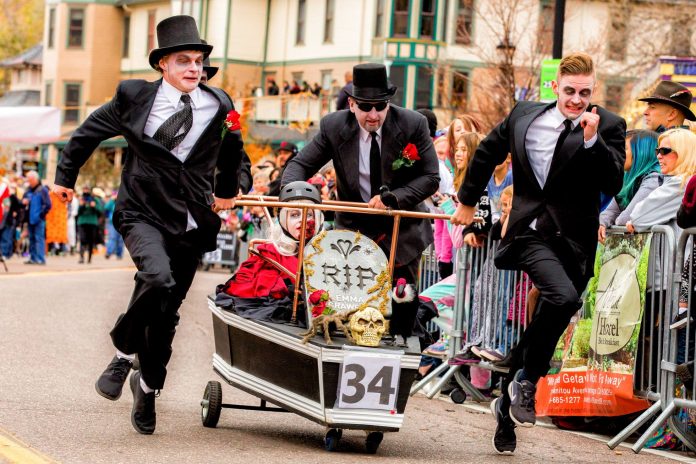 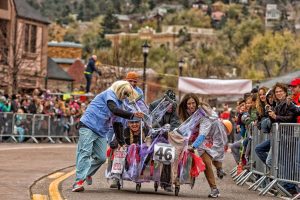 Residents and businesses in Manitou Springs are gearing up for the 24th Annual Emma Crawford Coffin Races and Parade, scheduled for this Saturday.

Since 1995, Manitou Springs has been holding the annual Emma Crawford Coffin Races and Parade, which features costumed impersonators of Emma Crawford who ride on coffin-like contraptions pulled by teams of four mourners. (Emma supposedly still haunts the mountain even though her coffin washed away years after her burial.) A parade and awards for the best Emma, the most creative coffin, and the best overall entourage complete the day-long event. 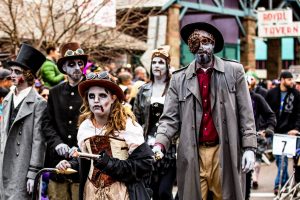 Festivities begin at 8 a.m. with make-up, mimosas and pancakes at CK Comics, 719 Manitou

Ave. Beginning at 9:30 a.m., free parking will be available for bike riders at Buffalo Lodge, 2 El

Paso Ave. The hearse and coffin parade begins along Manitou Avenue at noon, followed by the

coffin races and awards from 2 p.m. to 5 p.m. at Soda Springs Park, with live music by Family Elephant. 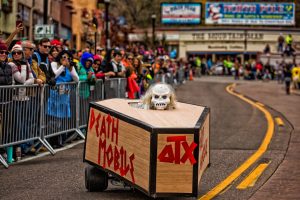 Emma Crawford is a recognizable name in the Pikes Peak region today. Despite the notoriety of Emma Crawford, her legend as the ghost of Red Mountain has overshadowed factual information about her life. 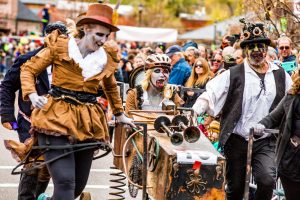 Born March 24, 1863 in South Royalston, Massachusetts, she was musical at a very early age and developed her talent with the help of her mother, Madame Jeanette Crawford, a pianist and music teacher. It is said that at the age of three, Emma would sit at the piano and listen to her mother practicing Beethoven’s sonatas. By the age of 12, she was giving piano lessons and recitals. By 15, she could render the music of the great masters practically perfectly, playing the piano parts in a series of concerts given by a renowned violinist and cellist in Boston in 1878.

and mandolin, which she mastered while resting from her piano work. Her obituary in the

the piano from spirit instruction and is said to have never taken a lesson at moral hands in her life.”

Since the age of seven, Emma and her mother moved to Manitou Springs in 1889, in the

hope that the local mineral waters and the mountain air might cure her illness, which was

assumed to be tuberculosis. Although not found in records, they reportedly rented a two-story

frame house with a gable roof and bay windows at 104 Capitol Hill Ave. She was also reportedly

engaged to William Hildebrand, an engineer from New York who was working on Pikes Peak 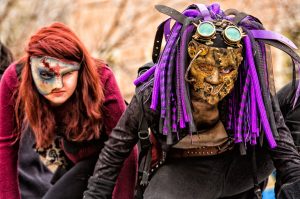 In addition to her love of music,  Emma also loved nature and she could often be seen in a red dress climbing Red Mountain, which she nicknamed “Red Chief,” in honor of Native Americans.

An article by Rufus Porter published in 1969 in Colorado Springs Gazette Telegraph, claimed

to protect them in the present one.”

here remarked her calm, unruffled mood, and though her life was such that intimates were few,

she was known by nearly all as a musician of rare power and skill.”

Services were held at “the family residence on Ute Avenue” on Tuesday, December 8, 1891.

The newspaper story characterized the service as “unusual, but very impressive, and partook

not of the customary sadness of such scenes.” Emma’s mother, Jeanette, performed a selection

of piano pieces with “peculiarly sweet melody and weird harmony.”

Her fiancee, William Hildebrand, tried unsuccessfully to get a deed to the site for burial on the summit of Red Mountain. However, her burial at that location, where “a beautiful view can be obtained,” proceeded. The gray casket with silver handles and silver engraved nameplate was reportedly carried to a hearse and driven up four blocks on Ruxton Avenue. Then, a group of 12 pallbearers worked in two shifts to transport Emma’s casket to the top of Red Mountain.

One local, who was a teenager at the time, said, “they buried Emma on the mountain top, beneath an ugly, wind-swept tree, and they covered the grave with rocks. Hildebrand stood like a stricken man beside the grave. Her mother and other mourners only went as far as the

Emma’s grave was moved to the west side of Red Mountain, put into “loose gravel” and

questioned by police. Marshal Davd S. Banks of Manitou investigated and found wrapped in a

The remains were confirmed as those of Emma Crawford and were taken to City Hall. She was later buried in an unmarked grave at Crystal Valley Cemetery. In 2004, nine years after the festival began, Historic Manitou Springs, Inc. provided a memorial stone in the approximate vicinity of her bones. Their wish was that Emma’s spirit could rest in peace.