The Rams have been riding the struggle bus all season, but they actually appeared to be a decent team last week.

Two weeks ago, the Rammies lost a tough one against San Diego State at home but last week they earned their second win of the season against New Mexico on the road.

During last Friday’s game, it seemed as if the Rams’ offense finally woke up and gained the ability to start putting points up on the board. Their defense still struggled by allowing the Lobos’ offense to score three touchdowns, but what we saw last week could mean that the Rams are improving by baby steps.

The Rams’ season has seen more downs then ups in 2019 and many have already counted out any chances of them ranking high in their Mountain West division. The Rams’ offense has experienced some good games where their running and passing games both seems to work, but they struggle when it comes to hanging in tough during those high-scoring shoot-out matches.

The Rams have this week off to improve their game defensively. Actually, they need to get better on both sides of the ball when they take on Fresno State on October 26.

Fresno State has lately had a pretty solid team despite two losses early in the season. Fresno State is currently sitting in second place in the MW West and they are looking to rack up an easy “W” when they take on the Rams in California next week.

Trevor’s  Prediction: The Rams will spend much time during their bye week working on improving. However, the team will quickly realize that they are just not that good this year. Just like the rest of the 2019, I think this game will be yet another case of when the Rams are placed up against a team that is just fundamentally better than them: Fresno State 32, Colorado State 14 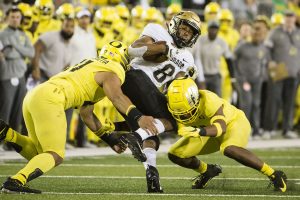 At one point in the season I thought that the Buffs looked good and that they were a bowl-worthy team this year. But slowly my thoughts are beginning to get proven wrong as the team keeps losing.

Two weeks, ago the Buffs hung on during a close one at home against Arizona but they fell at the end of the game and ended up losing 35 to 30. Last week, during a match under Friday Night Lights, the Buffs suffered an embarrassing loss to Oregon 45 to 3.

Given the fact that Oregon Ducks are ranked number 13 in national rankings this year, and most people thought the Buffs would lose that one, I still thought that they would hang in better against the tough Ducks. But I was badly mistaken.

The Buffs have a decent offense that has shown that they have the ability to add up the touchdowns. However, when they get matched up against a national ranking team, their offense seems to flutter.

The Buffaloes’ defense has also struggled all year. They tend to get embarrassed when matched up against stellar offensive teams and they seem to have the inability to stay strong until the end of the game. The Buffs have lost a few of the games they have played in the last quarter and overtime.

Whatever the case may be, if the Buffs want to rank high in the PAC 12 this year they need to get better at not allowing points on the board. This week the Buffs take on another team that has a stellar offense when they challenge the tough Washington State Cougars. The Cougars started out their season strong with three wins in a row. They then lost two, one against number 15 ranked Utah, and the other in a brutal high-scoring 67-63 battle against UCLA.

Trevor’s Prediction: The Buffs have proven they cannot win when it counts. They have beat some good teams but when they are matched up with either a team with good heart that will play hard to the end or a team that is stellar on both sides of the ball, the Buffs seem to fall. On the contrary, with their 130-point game behind them, the Cougars have proven their ability to stay strong when it matters. The Cougars have also beat some good teams this year and I think their toughness will show through and that they will sneak past the Buffs: Washington State 56, Colorado 48. 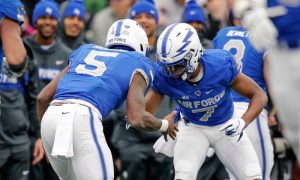 So far this season, the Falcons are the one Colorado college football team that has impressed me. The team has fallen in a couple of games but their losses were against the tough number 14th ranked Boise State Broncos and by Navy.

The Falcons have won some close ones this year, including the Colorado game where they beat the CU Buffs in overtime. The Falcons played tough during both of their losses against good teams and I think that they are the only Colorado college football team that has a chance seeing a bowl game this year.

However, with that being said, the Falcons have some work to do if they want to be competitive in their tough Mountain West Conference. The team’s offense looks stellar in just about every game as they have the ability to move the ball on the ground and in the air. Defensively though, the Falcons have struggled. The team seems to let good opposing offenses run all over them and rack up points on the score board.

The Falcons need to improve defensively this week as they take on the tough Hawaii Rainbow Warriors during a late Saturday night game that doesn’t start until 9 p.m. The Falcons will have to utilize their defensive playbook as they figure out how to stop a red hot Hawaii offense.

Hawaii has so far had a good season as they have won most of the games they have played. The team’s offense has proven that it can break away and cause an upset. During most of their wins, Hawaii has beaten their opposing teams by substantial margins and by scoring more than 30 points.

Trevor’s Prediction: I think that the Falcons, although they have been looking good, will struggle with this one. The Falcons’ offense will probably be able to put a decent amount of points on the board, but unfortunately I think that their defense will be unable to keep the Rainbow Warriors from answering every score the Falcon offense puts on the scoreboard. In the end, I think that Hawaii will basically just out-score the Falcons it yet another high-scoring bout in 2019. Hawaii 48, Air Force 45.