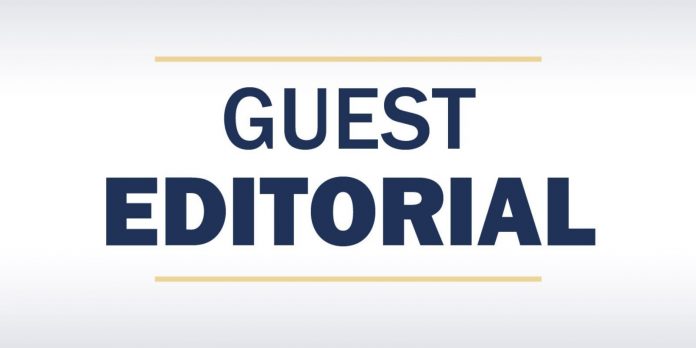 I have lived in Manitou Springs for a short time and have come to appreciate life in a small town existing in the shadow of a much larger place. On a few acres of land in the New Mexico desert, near Socorro, scientists are listening deep into space, sifting the static, trying to find the origin and the end of the universe. The big white dishes of the radio antennas have the presence of a question mark.

Over sixty years ago in a small New Hampshire town, Thornton Wilder wrote the play “Our Town,” when the universe as we knew it was a smaller place. But the questions we all ask are just as large.

In modern cosmology, the universe dances. Nothing is fixed. Time bends. The short history of our settlement here in America tells a similar story: a constant nervous migration. Many towns have been on the move most of their lives. Open almost any guidebook or history book written in the last 150 years and you will find towns praised as “one of the most delightful prospects which this world can afford,” or as a place possessing the fitness and poise of a clipper ship, “the highest and choicest beauty.”

Such praise casts the town as a beauty-pageant winner, all dressed up with no place to go. The town is seen as a finished work. But these towns, like all American places, are fluid and mercurial. Some were settled first on a hill, then moved down by the water to run the mills.

When the railroad came, they followed the rails, and when the automobile came to rule, they drove across the landscape to malls, condos and fast food joints. Indeed, now we lament a growing era when our region is about to be sold, to be swallowed into a sea of chain stores, national releases and nationwide hookups. And, we further lament the time when those stores close in an economic crash and leave acres of wasted land covered by huge parking lots and decaying buildings.

Some towns were a small Pleiades, a cluster of a half-dozen little towns.  These succumbed to a growing central town, which itself burned brightly until the auto age. Other towns are the story of the rise and fall of one commodity: clothespins, rocking chairs, shoes, buggy whips. American places are often but a rumor of community wrapped around the commerce of the moment. Go a little way off the roads around here and you will find the cellar holes of farms and small villages that long ago failed.

To the many towns pursuing a revival, this history is like the old joke.  The bad news is thatthese towns have changed, and the good news is that they can change again. We are a restless people. We don’t settle a place as much as we experiment with it.

Some towns are as imperiled as the family farm, as sitting down to dinner together with the family without appliances talking at you. Many beautiful, important places are being lost. A few will be saved. In my lifetime I have seen small towns crumble like a sand castle on the beach.

Tremendous forces are working against small towns. They are well documented. These forces include the car, the television, the video, the automatic teller machine, the entire growing electronic cocoon. We are more invisible to one another. Our inventions have atomizing effects and reinforce isolation. They celebrate individualism and starve the commons.

Every public policy we have set in place since World War II works against the revival of the small town: The model zoning codes, the funding and building of the highways, the post office’s eagerness to move from town centers, the high prices for public parking, increasing rents. We have built a machine to create sprawl, and it is wickedly successful. We have taken our penchant for migration and magnified it a hundredfold. We love our cars and roads more than our public places.

However, against these odds, people are working to save small towns, such as the Main Street efforts. They are trying to stop sprawl and find a better way to build. Newcomers may not know the old ways and the old stories. They take on the toughest challenges in partnership with the oldest residents.

The astronomers have their questions and we have ours. Will small towns survive? U.S. News and World report listed the most endangered small towns in all 50 states, indicating that the trend is continuing. Even large cities, such as Detroit and Pittsburgh have lost their glimmer. We may never find these answers in our lifetime, but when we do find them, the answers from both searches will be very big news.