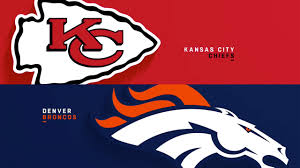 It’s a short week for the Broncos. Hopefully they didn’t celebrate too long after last weeks shutout of the Tennessee Titans.

The Chiefs are coming to town with only their second loss of the season. Last week the Houston Texans manhandled the Chiefs 31-24 at Arrowhead Stadium, an accomplishment few teams can boast having done.

Once believed invincible, the Chiefs failed to rally last week and were outscored in the fourth quarter 8-0, falling to the Texans. Chief’s quarterback Patrick Mahomes, alias Houdini Ma Homie, is playing with a nagging ankle injury but still managed to toss 3 TD’s in last week’s game. He also threw his first pick in a long time, and lost one fumble. His lack of mobility in the second half was noticeable. 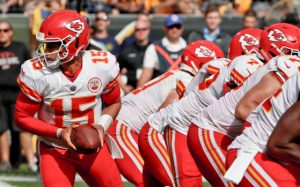 Mahomes was without his favorite receiver Sammy Watkins last week, but the return of Tyreek Hill made up for much of that. Hill caught 5 balls for 80 yards and two touchdowns.

Watkins isn’t the only injury the Chiefs are dealing with. Two of their offensive tackles and one offensive guard are banged up. If these guys cannot go against the Broncos Thursday night this could bode well for the home team.

The Broncos are coming off their first shutout of a team in four years. As I’ve been saying all season, this team would be one brick short of a load until the defense gelled and Head Coach Vic Fangio (Fang) started substituting players. With the season ending torn Achilles suffered by Bradley Chubb, it looked like the Broncos would be in for a long string of losses.

Fangio’s lack of confidence in the depth the Broncos have on defense kept him from playing those backup guys. With Chubb out he’s had to fall back on AJ Johnson, Malik Reed, Demarcus Walker, and Mike Purcell to anchor the defense. Everyone of those guys stepped up. I don’t think Fang is worried anymore.

All the talk before last week’s game was about how AJ Johnson had a great game against the Chargers, but worried he was a one game wonder and doubted the rest of the backup guys could hang with Marcus Mariota and the Titans. Johnson the real deal. He finished with 1.5 sacks and a forced fumble against the Titans and made 6 solo tackles. Walker added to the defensive effort with 2 more sacks and two tackles for a loss.

The vets on defense have also found their sea legs. Derek Wolfe had two more sacks, Shelby Harris had one, and Von Miller combined with Johnson for a half sack. All told, the Broncos had 7 sacks.

What is even more impressive about the Bronco defense is their toughness in the redzone. Chris Harris picked off Mariota and Kareem Jackson picked off Titan replacement quarterback Ryan Tannehill at the Bronco one yard line to put the game on ice.

So this is two wins in a row and a major improvement on defense.

Next week is another division game. The Chiefs are going to be anxious to put the Texans game behind them and take it to the Broncos.

The Chiefs, even with second string offensive linemen are a force of nature. Mahomes can turn a game around on a dime and give you nine cents change. If his ankle is still bothering him on Thursday he may fall prey to a hungry Bronco defense. 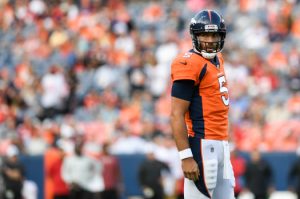 If the Broncos are going to win this game, they’re going to have to run the ball and play flawless offense. The good news is the Chiefs are not that good against the run.

Being a home game, I give the Broncos a half a point for that. Being a night game, I take that point back. So, with the Chiefs loss last week and the Broncos shutout, I’m going to say the Bronco defense is going to continue to play lights out and stuff the Chiefs. Not to say the Chiefs won’t make it interesting.

The Broncos are confident on defense, not so much on offense. Joe Flacco has thrown an interception in every game this year. The Titans was a tough team to score on so I don’t think it was all a lack luster performance last week. The Chiefs defense is no where near as good as the Titans.

I’m gonna go all Homer on this one and say, TMJ News prediction: Broncos win at home against the Chiefs 23-21 on the leg of Brandon McManus.