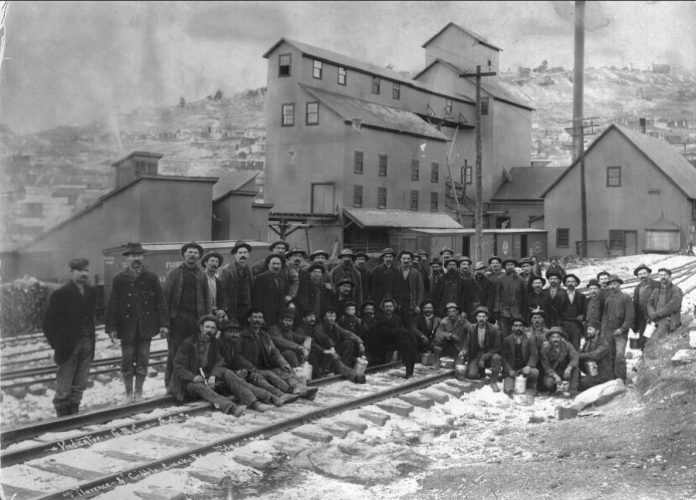 Editor’s Note: This week marks the 28th anniversary of gambling in Colorado. The following represents a few historic glimpses into this amazing development that changed the face of Teller County and Cripple Creek. The story, which even dates back to the 1890s, continues to unfold.

A History of Gambling in Colorado

As towns sprouted in the 19th-century American West — outside Army forts, at river crossings along wagon trails, in mining districts and at railheads — some of the first structures built were recreational facilities. Recreation for the almost totally male population inevitably meant the triple-W vices of the frontier: whiskey-drinking, whoring, and wagering. 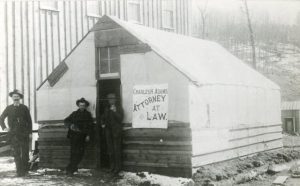 Saloons, brothels and gambling halls would appear almost overnight. In the early camps, the structure might be only a lantern-lit, dirt-floored tent, the bar simply a board stretched between two whiskey barrels, the prostitution facility just a cot in a wagon bed for the use of a single female strumpet, and the gambling outfit only a rickety table, a few chairs and a greasy, dog-eared deck of cards. As the towns grew and prospered, these primitive facilities were replaced by one-story wooden buildings with false fronts to make them appear even larger.

And if the community developed into a city, saloons were housed in imposing brick buildings with ornate bars, huge back-bar mirrors and brilliant chandeliers. Some brothels became elegantly furnished parlor houses with attractive ‘boarders’ managed by madams whose names were famous throughout the West. The best-known sporting men of the West presided over and patronized gambling houses that were often the most impressive and elaborately accoutered structures of the cities.

The popularity of gambling in the West can be attributed mostly to the fact that all who left the relative safety and comfort of the East to seek fame and fortune on the frontier were, in a sense, natural-born gamblers. In the early West, gambling was considered a profession, as legitimate a calling as the clergy, the law, or medicine.

Leadville, 10,000 feet high in the mountains, blossomed almost overnight into the largest city in Colorado, and at one point its boosters attempted to wrest the state capital away from Denver. At its peak, gambling opportunities were afforded in more than 150 resorts ranging from small saloons to elaborate theaters and concert halls. Some of the better known were Tom Kemp’s Dance and Gambling Hall, which in 1879 featured vaudeville song-and-dance star Eddie Foy; the Texas House, where proprietors Bailey Youngston and ‘Con’ Featherly provided a dozen faro tables around the clock; and ‘Pop’ Wyman’s Great Saloon, in which a large sign over the bar read: ‘Don’t Shoot the Pianist — He’s Doing His Darndest.’

Most of the leading Western gamblers, including Ben Thompson, Bat Masterson, Luke Short and Doc Holliday, spent a good deal of time — and money — in Leadville. There is a story that after dropping more than $3,000 at faro one night there, the volatile Thompson in a fury turned over the table, jerked out his six-shooter and shot out all the lights, sending panic-stricken patrons scurrying for the exits. Holliday, suffering one of those streaks of bad luck and near poverty that plagued all gambling men, shot another sporting man named Billy Allen in Leadville in a dispute over a mere $5

As time went on and western towns became “more civilized” in the Christian-Judeo sense of the word,  American laws fluctuated, making gambling illegal, much to the pleasure of the Puritan folk. As the years went on, legalized gambling gathered more support, and various states began accepting the development of state regulated casinos. 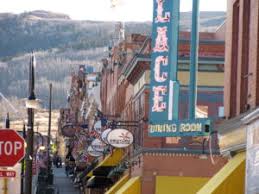 Colorado gambling enthusiasts were greatly pleased in November of 1990 when casino operators made their way into Colorado. Voters supported the legislation to legalize casino gambling in Colorado, and in 1991 the law was officially implemented. The guidelines came along with a limited stakes rule, holding all bets to a maximum of $5, and an ‘adult only’ law requiring Colorado casino gamblers to be at least 21 years of age.

Colorado state government legalized casino gambling in three towns – Black Hawk, Central City and Cripple Creek. Each of these towns are considered National Historic Districts. The purpose of this legislation was to preserve the history of these towns.

In 2009, the state’s casinos increased betting limits to $100, added new games and began operating 24 hours a day. In addition to the excitement of gambling, each destination offers fine dining, luxurious hotels, and most importantly, authentic slices of history. Casino revenue has helped preserve and restore the towns’ 19th-century charms, as well as more than 600 other historic properties across Colorado.

In Cripple Creek, after several years of declining gaming revenue, due to wildfires and flooding that made travel to the city difficult, the city petitioned the state Department of Revenue to allow them to serve alcohol 24 hours a day, instead of the long held tradition of stopping alcohol service at 2 a.m.

Gamblers from Denver traveling toward Central City will find Black Hawk first, along the route, therefore making it more convenient to place their wagers at Colorado’s Black Hawk casinos. For this reason, Black Hawk has acquired the highest revenue in Colorado casino gambling, among the three towns. Plus, Black Hawk sports some of the largest casinos in the state, such as the 33-story Ameristar resort.

In an effort to increase revenue and compete with Black Hawk’s significant casino gambling business, Central City has financed an exit directly off Interstate-70 near Idaho Springs. The 4-lane Central City Parkway exit would give travelers substantially less driving time to reach Central City’s casinos, while at the same time taking them off the path to Black Hack.

Another draw for gamblers to visit Colorado’s Central City Casinos is the true preservation of national history. Black Hawk’s casinos, on the other hand, have opted for a more glamorous style, constructing their casinos with a glitzy style more akin to Las Vegas. Cripple Creek is considered to be the middle man in regards to development, straying more from the historical aspect than Central City, yet avoiding the lights and flamboyance of Black Hawk casinos.

Cripple Creek, though, is making a big wager in developing more hotels and amenities, as plans are in the works for several signature expansion projects that could add 500-plus rooms to town. The Wildwood casino has already broken ground on a new $14 million-plus hotel, and big plans have been approved by both the Triple Crown casinos and Bronco Billy’s. These efforts are part of a bid to make Cripple Creek into more of a several-day destination area.

Residents of Colorado frequent the casino gambling facilities, but being a major hot spot for tourists, especially those who come to ski the majestic slopes of the Rockies, Colorado gambling revenue is significantly increased by those vacationing in the mile-high state.

As the popularity of gaming in Cripple Creek has rebounded with a vengeance, following some lean years, as a result of wildfires and flooding that made travel to the city difficult. But with the new hotel boom and a variety of new activity, the future looks bright for Cripple Creek as it celebrates the 28th anniversary of legal gambling.

A popular old saying in Colorado is, “If you don’t like the weather, stick around 15 minutes.” This alludes to the fast changes in weather patterns that often occur in the state.

One could apply the same saying to gaming in Colorado. Changes take place often and quickly and usually for the benefit of patrons of these establishments.