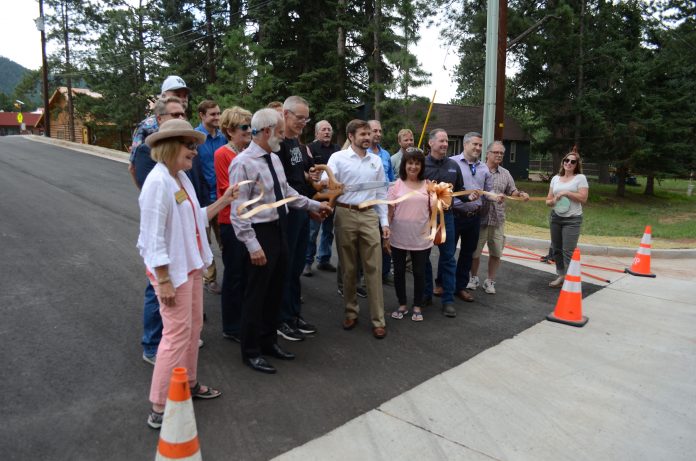 The Pikes Peak Avenue extension from Willow Street to highway 24 was officially opened to the public last Friday afternoon. A host of local politicians, Chamber of Commerce, DDA members, and city employees showed up for the official ribbon cutting.

The project was a collaborative effort of the city, the Downtown Development Authority (DDA) and Taylor Mountain Enterprises.  The new road will provide access to the Human Bean drive through coffee kiosk located next to the Dinosaur Center and allow local residents another access point to highway 24. 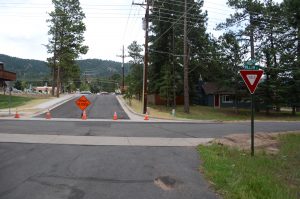 The project started in the spring of 2018 and was a required infrastructure improvement for the development of the coffee kiosk and soon to be built car wash by agreement with the DDA. The DDA gave the developer, Taylor Mountain Enterprises, a tax increment finance agreement (TIF). A portion of the taxes generated by the development will be refunded to the developer up to $400,000 in return for Taylor Mountain Enterprises’ footing the bill for the public improvements.

According to DDA Treasurer Tanner Coy, “The public improvements that were installed include the street, burying some power lines, extending public utilities, sewer/water main improvements, drainage improvements, and sidewalk curb and cutter. The DDA is pleased to be a part and have such a great project to support.”

Mayor Neil Levy thanked everyone involved in the project and declared it a great public benefit. Levy also lauded the cooperation with the DDA and everyone involved to make the project possible. The mayor said, “From the city’s point of view, just a big thank you. It alleviates some of the traffic issue here and is a great new business in town. So just thanks to all of you for doing this project. It’s a poster child in my opinion.”

Financing for the project was provided by Park State Bank and Trust.